Friends, Romans, Countrymen, it’s time to admit it; Disney is for kids.

Don’t get me wrong, I love Disney. The films are fun, colourful and even though they slip just enough Blue humour under the radar to keep even the most joyless adults happy, morality tales and talking fish just aren’t for us anymore. Disney movies are supposed to give parents a ninety minute break while also teaching their children that sharing is good but strangers and ugly people are bad. But every now and then you find a message hiding in Disney movies that seems a little out of place, like Snow White being saved by dwarfish miners who haven’t seen a woman in years, or a lion cub Game-of-Thrones-ing his way up the food chain. But perhaps the most bizarre story of all is hidden in Disney’s Beauty and the Beast.

But before we get started, there’s a few things we have to clear up. During ‘Be Our Guest’, the knives, forks, clocks, wardrobes and various other household accoutrements tell Belle that they’ve been waiting for ten years for someone to arrive. The witch’s curse at the beginning of the film states that the enchanted rose will bloom ‘until (the Prince’s) twenty-first year’ and the last petal falls at the very end of the film, all of which adds up to the Prince being ten-going-on-eleven at the beginning of the film. Are we all with me so far?

All this seems perfectly fine until right at the end when Chip, Mrs Pott’s son, gets turned back into a human. The problem is that Chip is clearly less than ten years old, so by all rights shouldn’t exist. 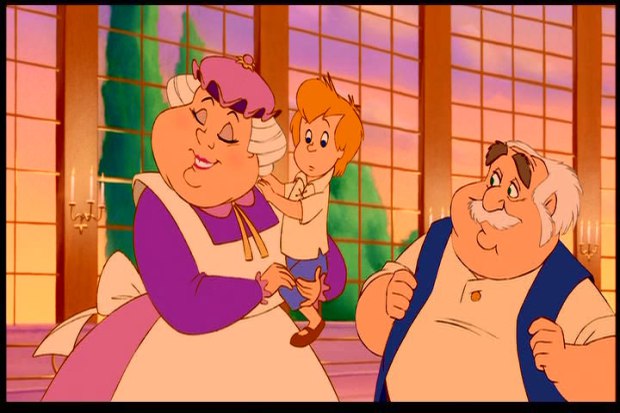 There is a similar problem with Fifi the Feather duster, who is clearly a woman in her twenties. This means that ten years ago she was probably somewhere between ten and fifteen, making it really inappropriate for creepy, middle-aged Lumiere to flirt with someone he’d known since pre-pubescence.

The fact of Lumiere and Fifi’s relationship and of Chip’s very existence implies that, while the Beast was allowed to grow organically as an animal, all of the household staff were frozen in arrested development. The man-bear-wolf ages, as man-bear-wolves are wont to do, but all the carriage clocks and armchairs came out the exact same age they came in.

But what happens after the movie?

Presumably, every member of the household had a family and cherished loved ones, and the first thing they’re going to do is go to visit them and have a ‘Hey, I’m no longer Silverware’ party, but how do you think their families will feel? Their younger siblings will appear older than they are, tons of the people they knew and loved have died horribly after spending ten years in disease-ridden, provincial France. Then, along comes Cogsworth, looking the exact same as he did ten years ago? Man, fuck Cogsworth.

And what can the staff say, when their family ask? Gaston already proved that private citizens can have other, non-crazy citizens institutionalised, so would anyone turn around and says oh yeah, there was this witch, I got turned into a wardrobe and then someone filled me with linens for ten years? Imagine if someone you knew had been missing for years, then turned  up unexpectedly looking exactly the same as the day they disappeared; you’d want an explanation, but you probably aren’t crazy enough to buy ‘turned into crockery’ as an excuse.

Here’s what happened to every member of the Beast’s household staff. Either they’re doomed to spend the rest of their lives lying to their friends and families, watching them die off at a ten-year deficit, or they were locked away in an institution by the people that they loved and trusted the most, whiling away the rest of their lives eating gruel and staring at the walls, telling anyone who’ll listen ‘No, I really was a carriage clock, you have to believe me’.

That’s the real Beauty and the Beast; Cogsworth slowing going insane, locked in a cell and fingerpainting his walls with faeces.